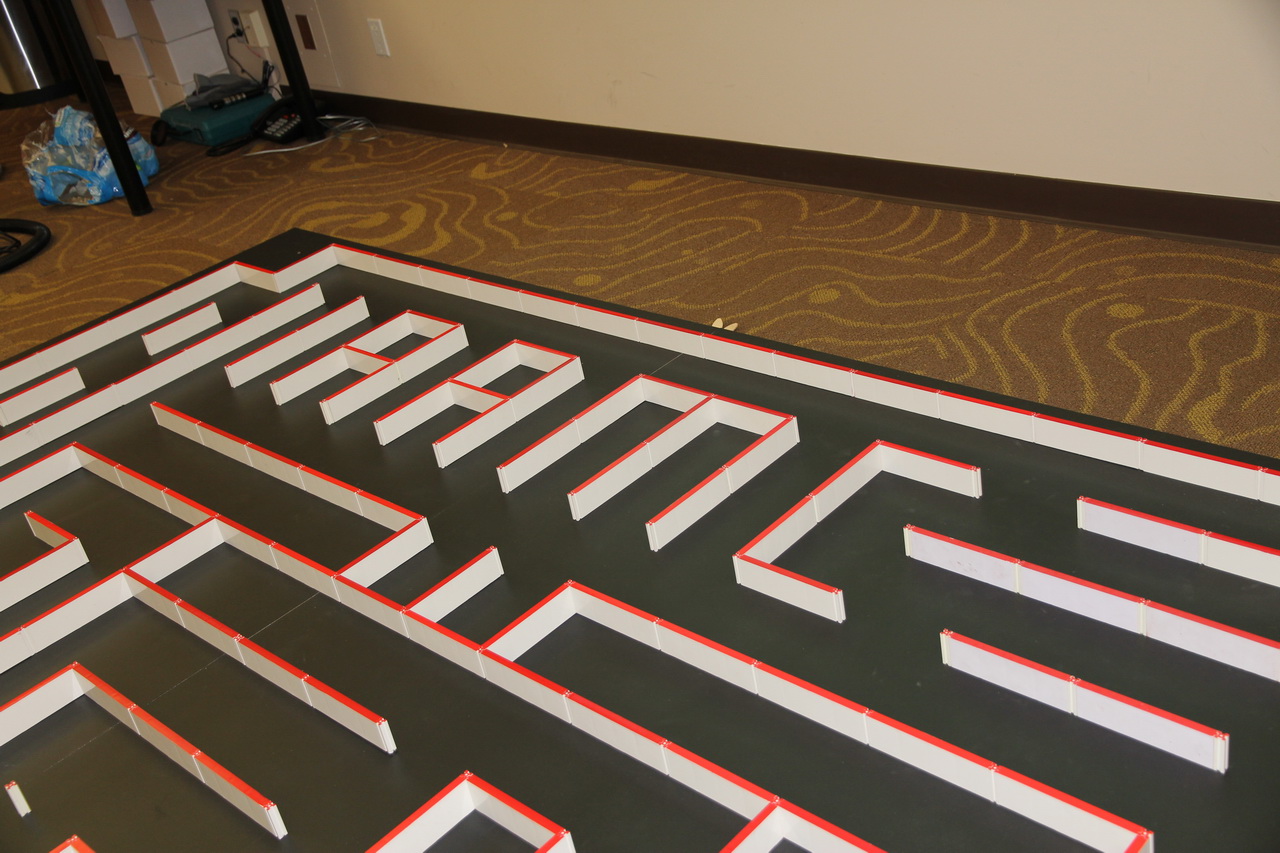 The First All America Micromouse Competitoin was held on Sunday, May 26th, 2013 on UCLA Campus.

The Maze was set up on Saturday, May 25th, 5PM. I was there early so I helped them to set up the practice maze for all contestants to practice over night. The All Japan 2012 expert class final maze was selected as the practice maze.

The maze was newly constructed for this event. It was make by two 10×5 feet median density fiberboard. The holes were drilled with the assist of a customized metal template with holes accurately positioned. The painting process was dealt with several coats of water-based no-reflective(flat) interior paint by using micro fiber super fine roller. I was impressed with the actually output of the smoothness of the surface.My friend Hui Wang worked hard on this to have it finished on time, so he definitely should take some credit from this. 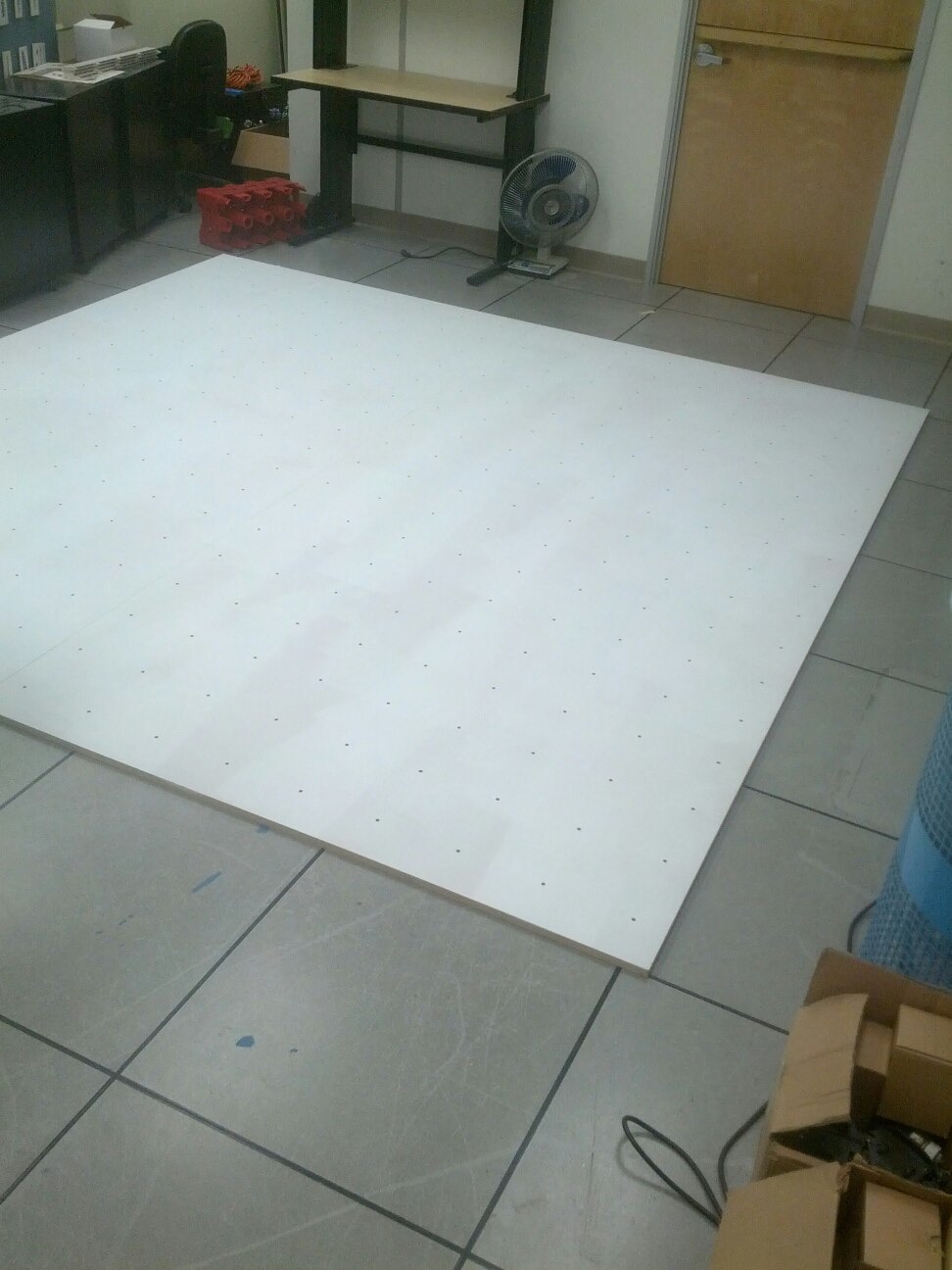 Turned out my mouse didn’t have too much trouble to perform a relatively faster turn on this maze, at least it performed same as what my  mouse have had done on my own 6X6 cells practice maze.

The other fact was that in order to keep the maze clean until the end of the competition, everyone were asked to take off their shoes to prevent stepping on the maze since the maze is placed directly on the carpet. 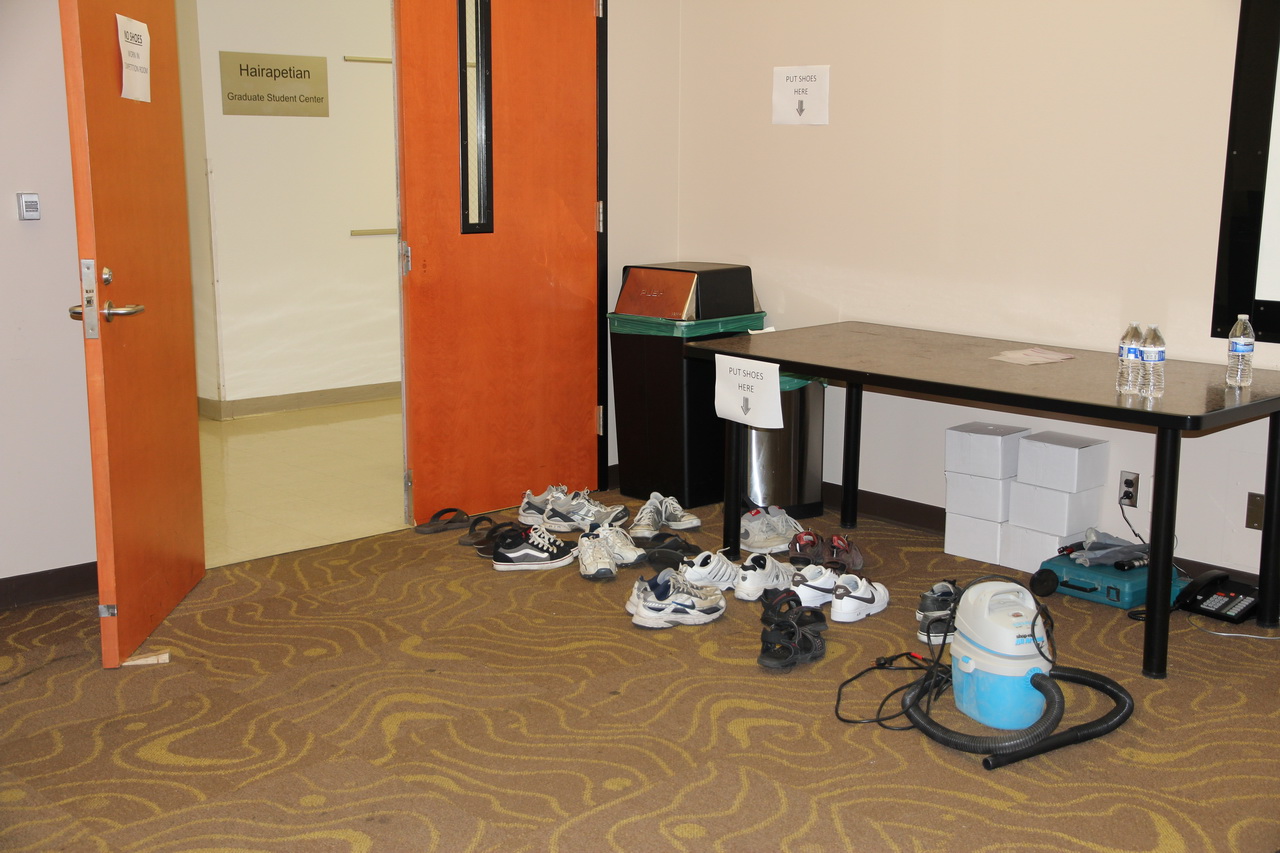 Since the wall and posts are both plastic(same as my practice maze wall and post), my mouse could run pretty safely to finish a search run in the maze at 0.7m/s average speed without recalibrating the sensor threshold values. At least a slow diagonal speed run can be finished without too much risk. 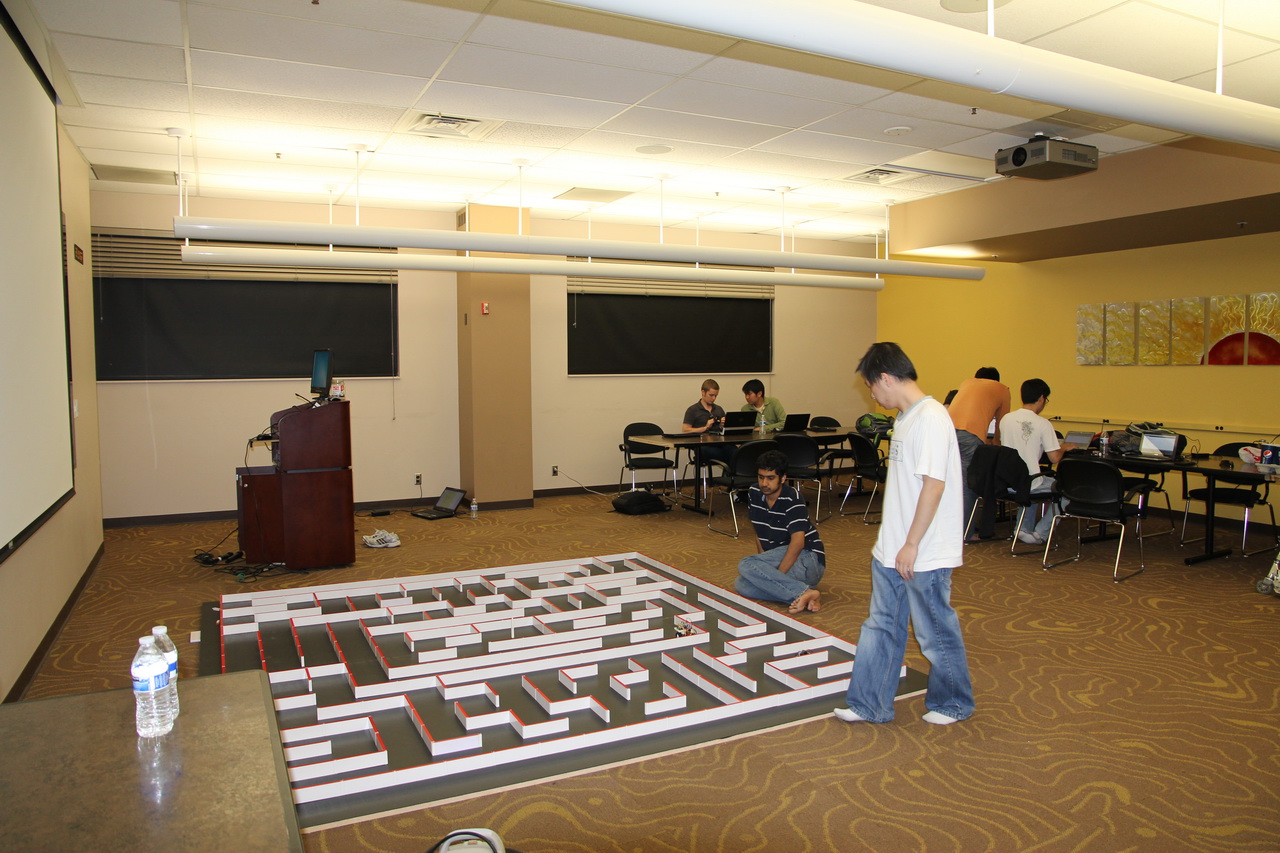 There were more teams arrived to practice for competition as the time goes, sooner the maze got occupied by couple mice. I stopped running my mouse and started to gathering sensor threshold values for this maze instead. 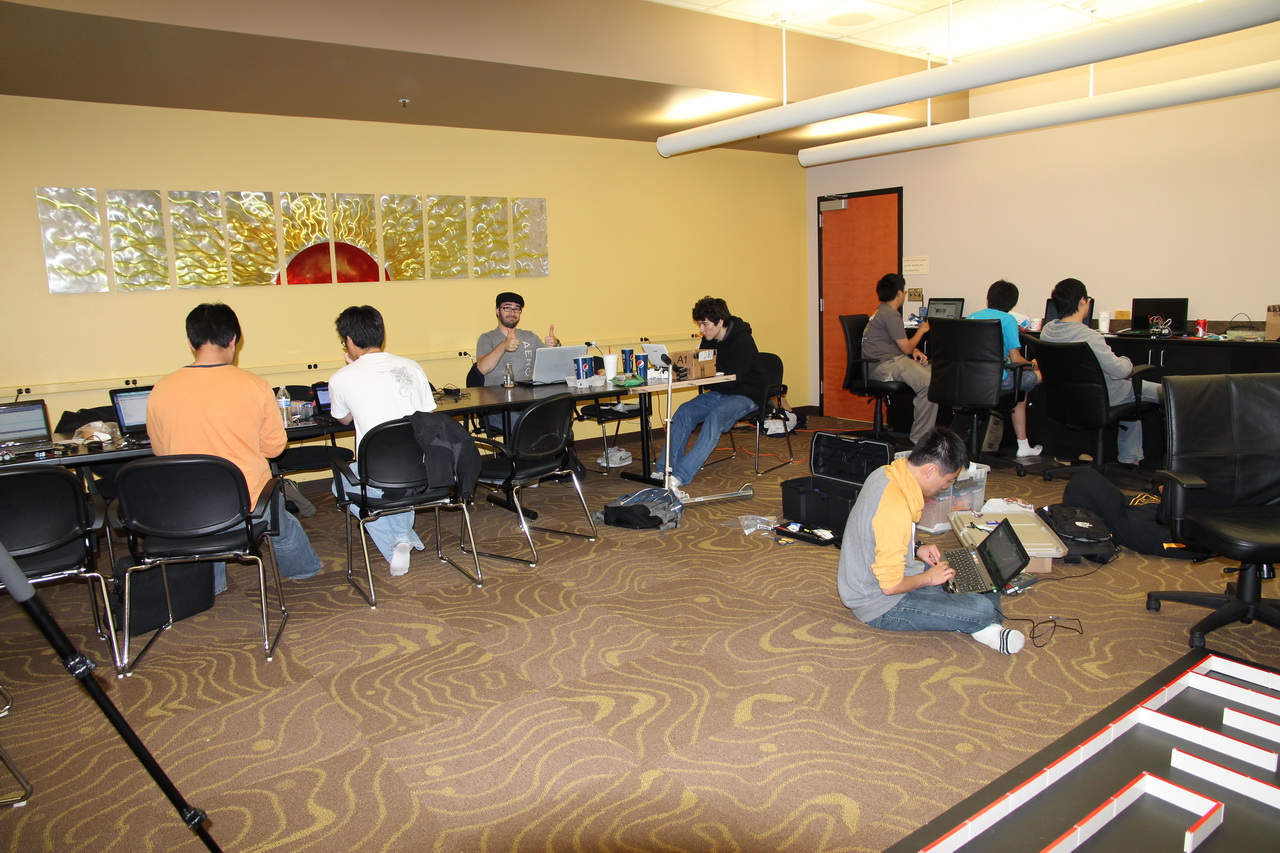 At the meantime, snacks were provided for help all overnight contestants to keep refresh. 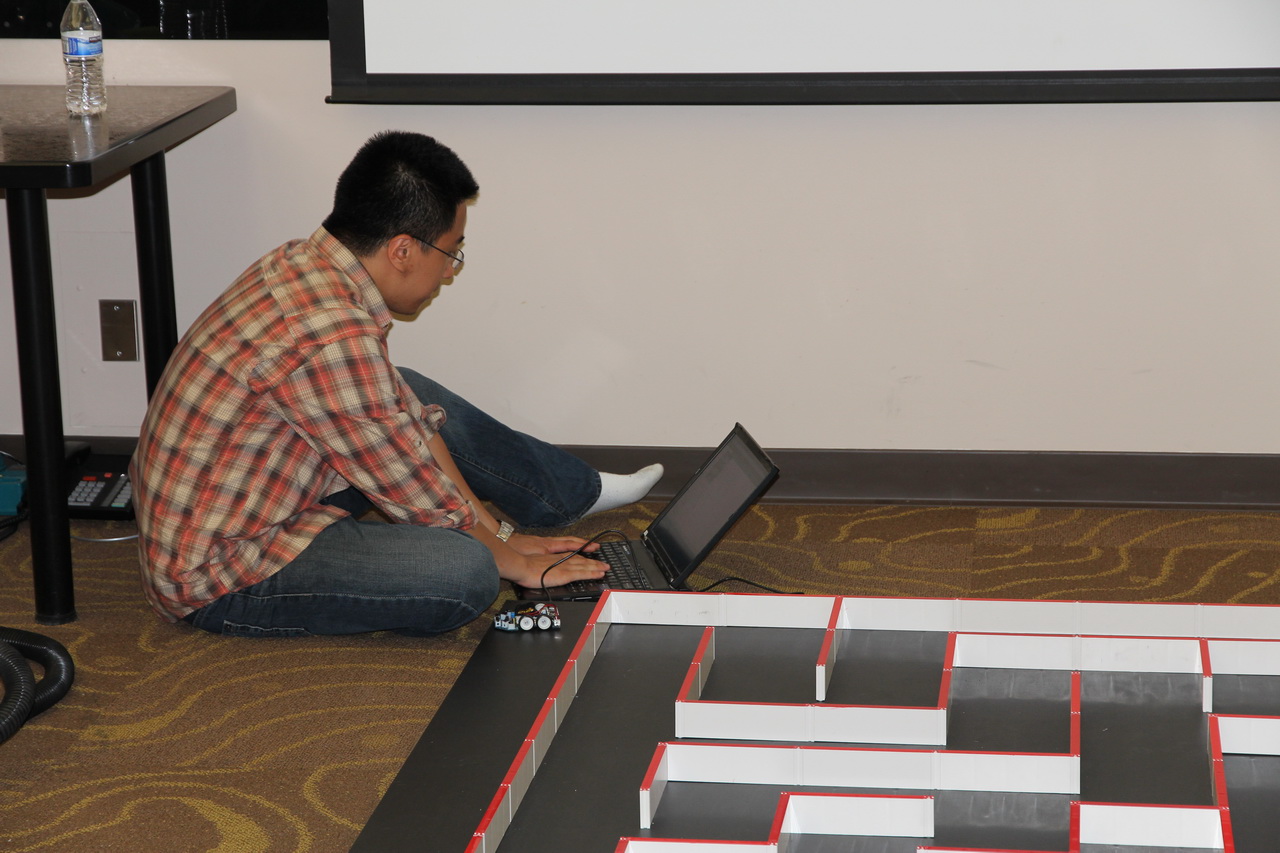 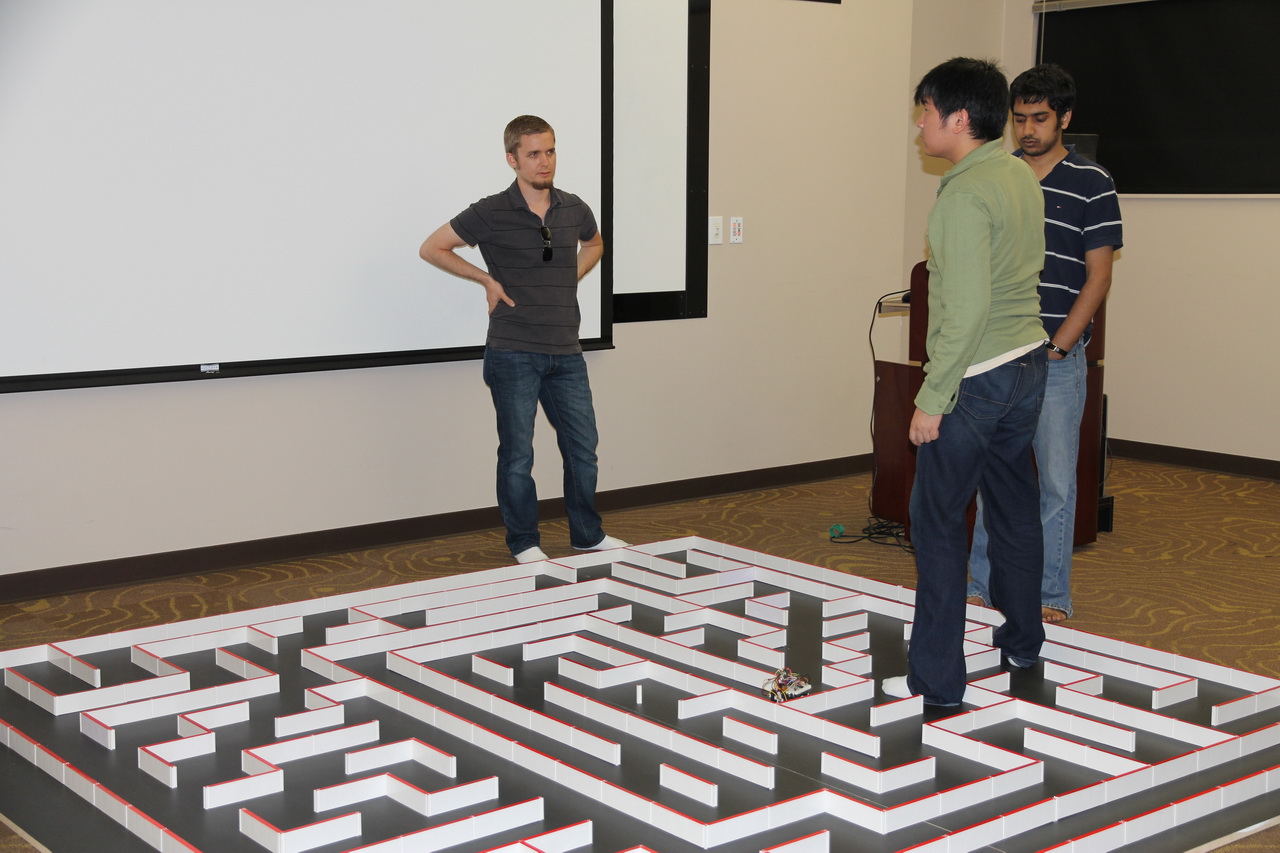 After 8AM in the morning, the practice session was terminated and all contestants went to another room for breakfast and had some possible naps.

At the same time, IEEE officers were busy setting up the maze for competition.

Sooner, the maze was completely set up. The first thing in my site is there was is 1AAMC sign on the top. The maze was designed by Professor Ng Beng Kiat from Singapre, one of the top micromouse player in the world who won the champion of 2011 All Japan Micromouse Competition. 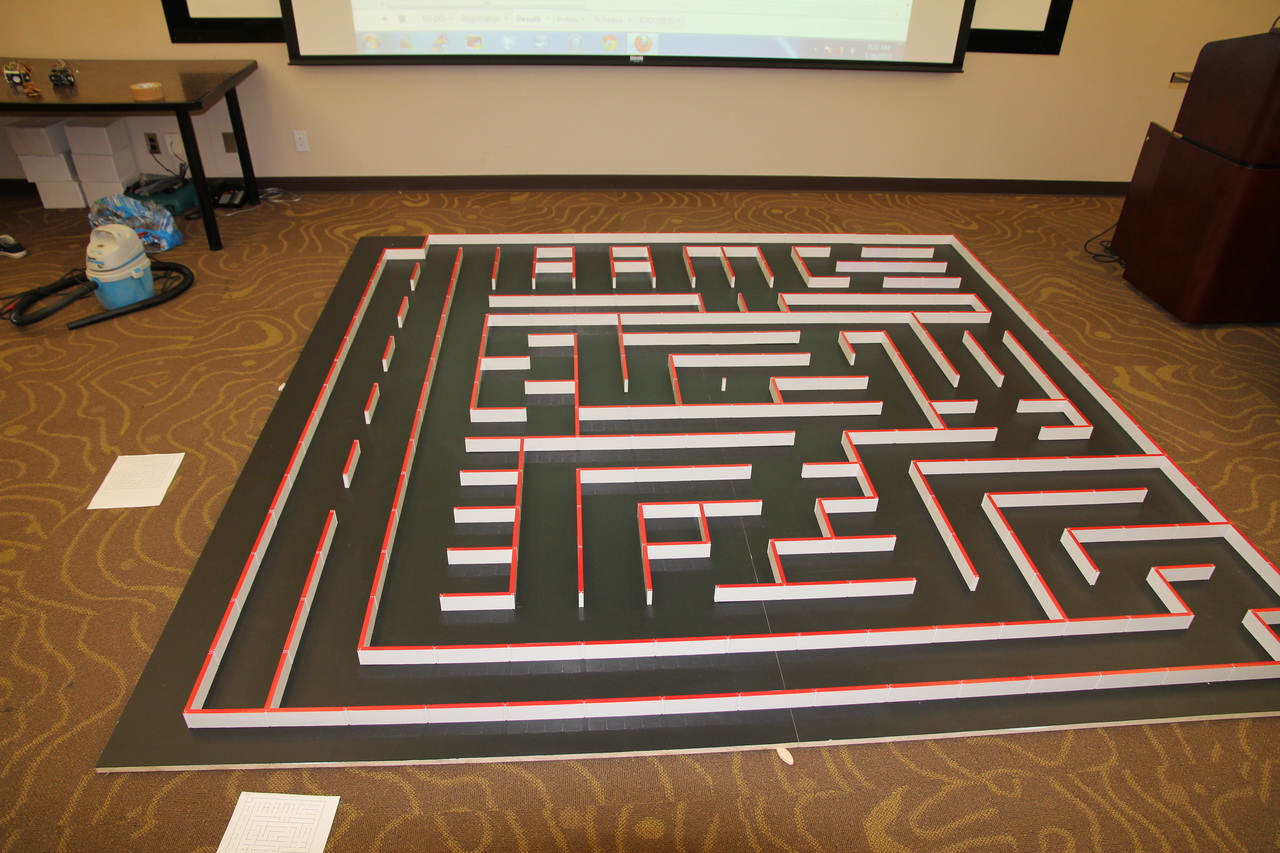 The maze is a typical multiple paths design. There are 3 paths with 51 cells and at least 2 paths with 62 cells.

The red, green and purple paths all have 52 cells, however, the purple one seems to have more turns. Clearly red path is a straight orientated and green one is diagonal preferred.  On the other than, the brown path with 62 cell isn’t that bad since it has a lot straight ways.

The competition started as 10:00 AM. All contestants who registered were asked to place their mice on a nicely designed customized certificate. This part is quite similar to APEC Micromouse Contest and I am glad they can learn it from other competitions 🙂

Again, all people were asked to take off their shoes in order to keep the room and maze relatively dust-free. 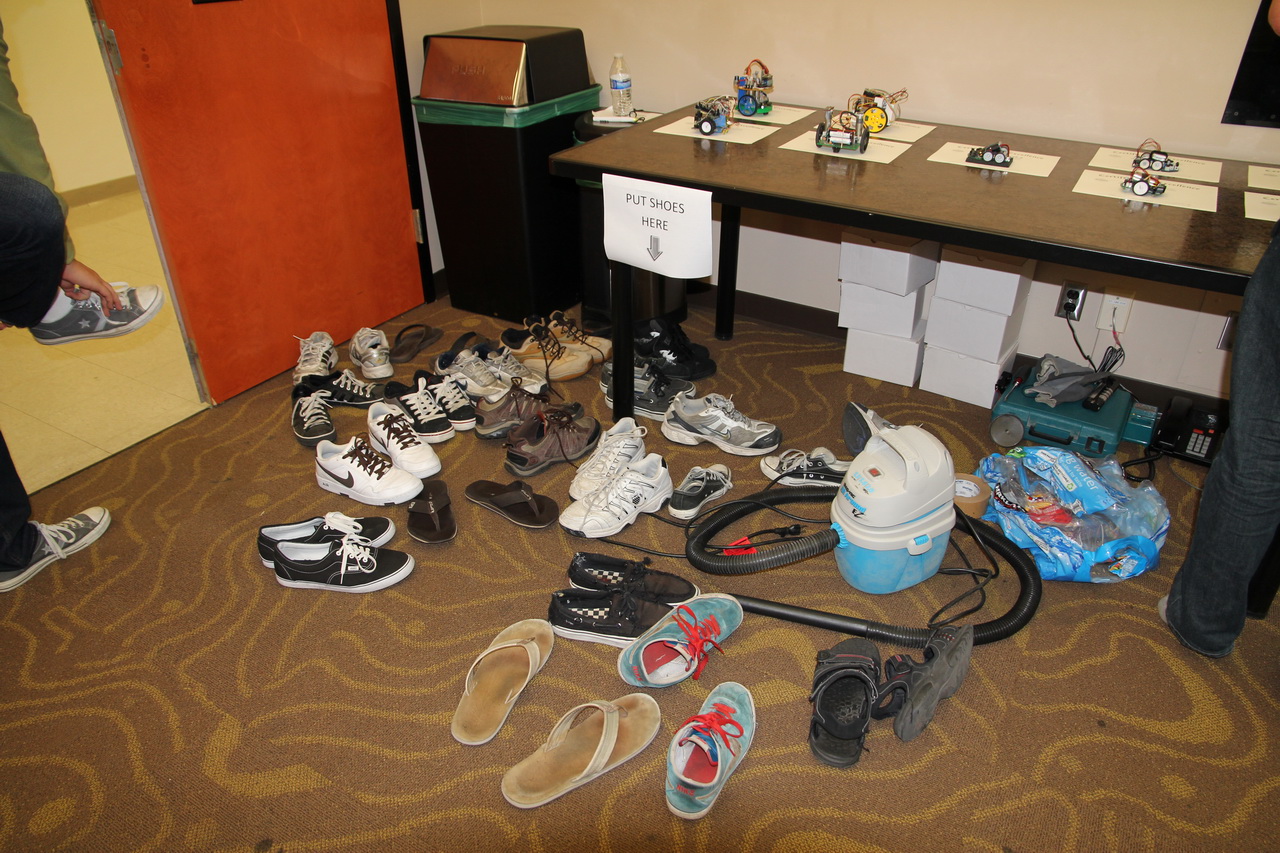 There were 10 teams were competing in the competition by following the order as below.

A short break were suggested after team Overvolt from UC Riverside finished its run. Then we had our 7th contestants to run his mouse. I believe his mouse was definitely the highlight of the day. After had its wheel dramatically stuck on walls again and again, it finally be able to explore 45 unique cells in 10 minutes. Proabably the most funny thing for us is how it get stuck on the wall:D. I suggested you to jump to 16:00 mark to enjoy this funny moment on the recap video as follow: 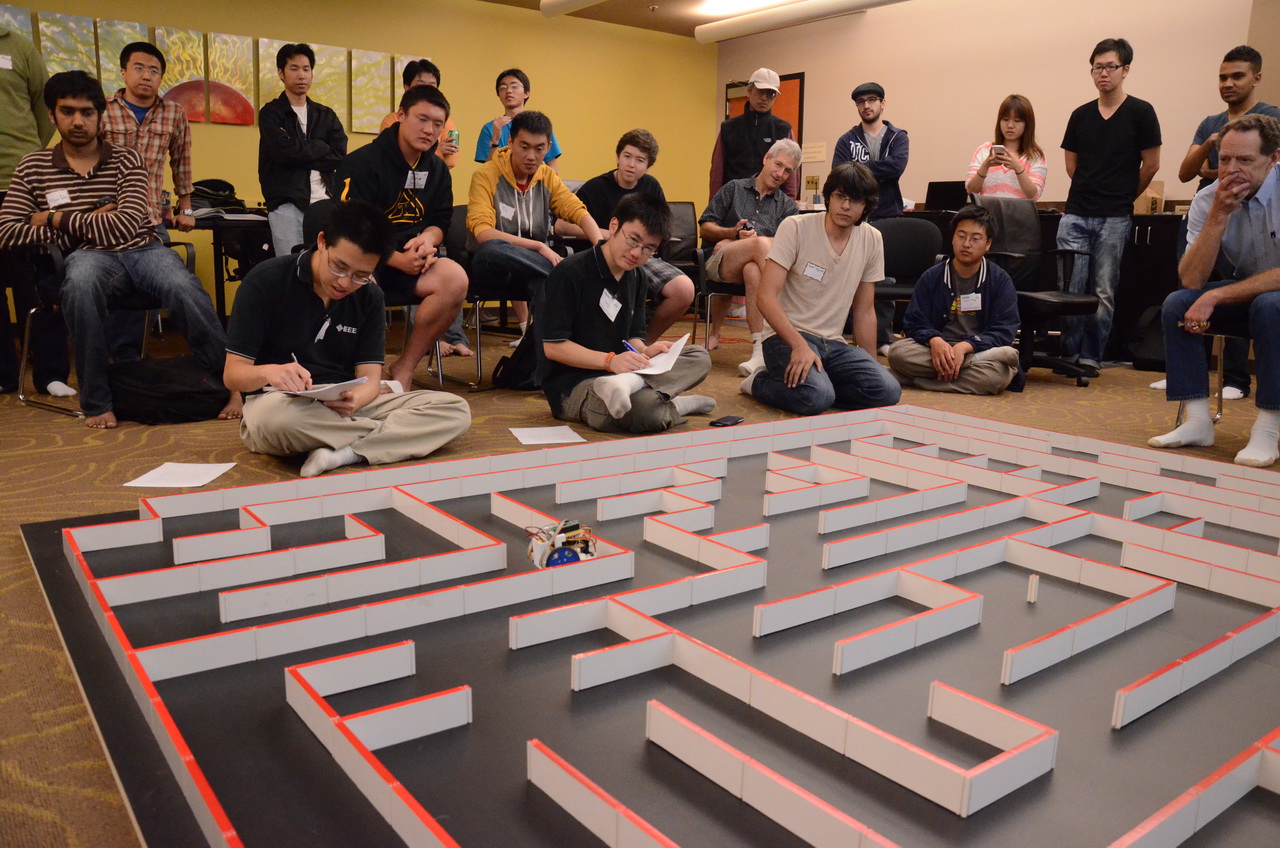 After another several runs from rest of the teams, it was finally my turn. Since I have a “good tradition” that there must be something happen on my mouse before competition.(lose spur gear on APEC, motor mount broken in CAMM, MCU burned 2 days before competition last year etc.). Once again, the history kept repeating itself and something bad did happen on the practice session, and on of my side sensor got terribly bended after a “heavy collision with other mouse”. The sensor was completely ripped off from the construction paper I place to separate emitter and receiver, but luckily, the leads were still stay on the PCB. It took me a while to have this fixed and obviously, the mouse no longer worked as good as before 🙁 (this was just a temporally fix)

At least for the worst case, my mouse can still run, all it matters was just it might be unstable on a faster run.

I started my run with a normal search speed at 0.7m/s and seemed nothing bad happened to against this. After the mouse back to starting corner,  I started my first speed run. The mouse crashed in a unexpected spot for my first speed run, so I had to pick it up. Since I have explored maze saved in flash, it didn’t take me that much time to start my second speed run. This time I slowed down the max speed on straight away in order to be safe and the mouse successfully finished its first speed run.

As the run goes, more cells were explored and my mouse was be able to do speed run on different paths. For the next couple runs, my mouse had chance to go through 4 different combos of paths(red, purple, blue, and brown). Unfortunately, it couldn’t step into the green path even a little bit no matter how I change the weight value for my path generator in its menu.

Nonetheless, I am pretty satisfied with the results since my path generator was designed for smooth turn instead of diagonal run. On the other hand, this indicated that how thoughtful Prof Ng Beng Kiat was when designing this maze 🙂

Here is the video clip for all my successful runs:

After all contestants finished their runs, a big lunch was provided by the organizer, then the closing ceremony came afterwards. 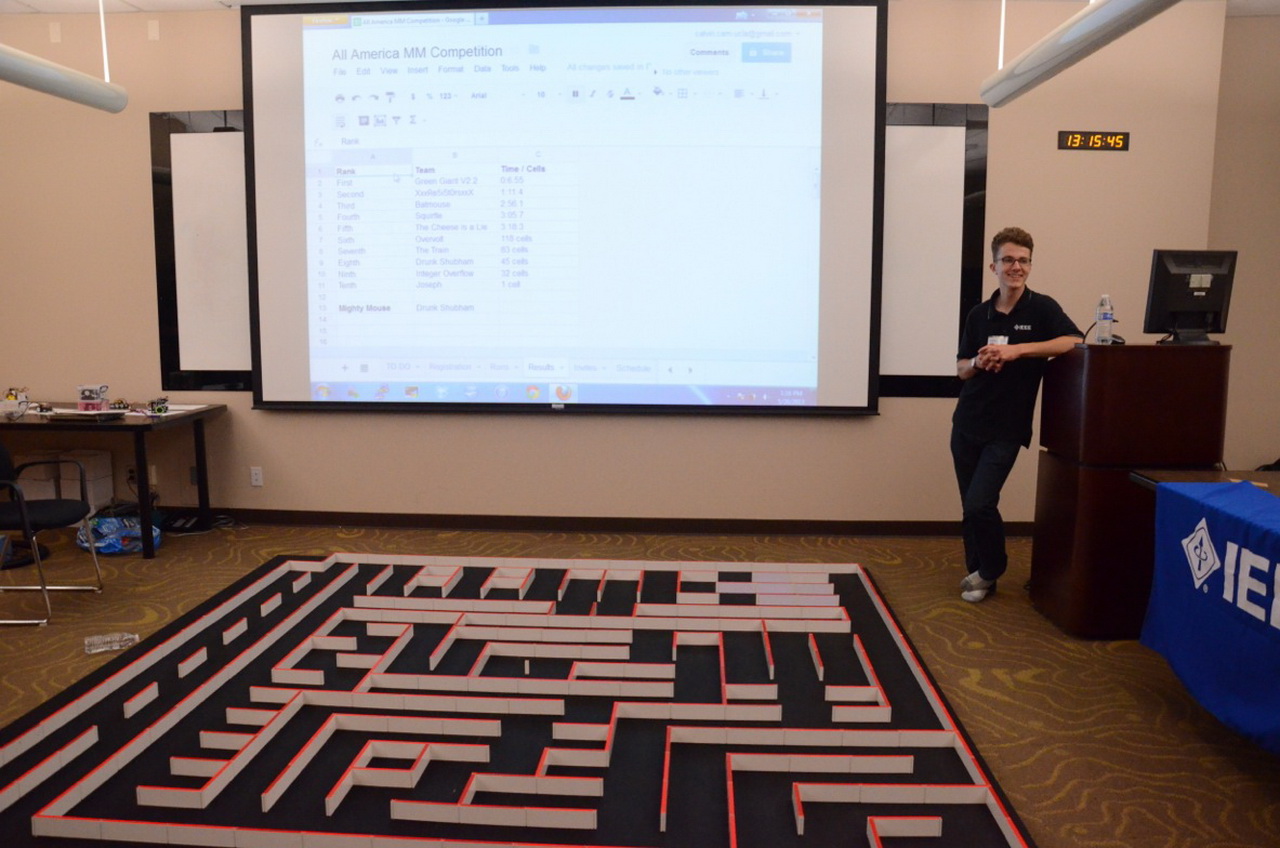 All rewards were announced by MC and team Drunk Shubham, the mouse who brought us most of the run, was awarded with “Mighty Mouse”. The Third and Second places were awarded to team BatMouse from CSULA and the team XxxRe5i5t0rsxxX from UCSD based on their best scores over 10 minutes or 10 runs. At the last, I was placed at 1st and a big check was given from MC as well 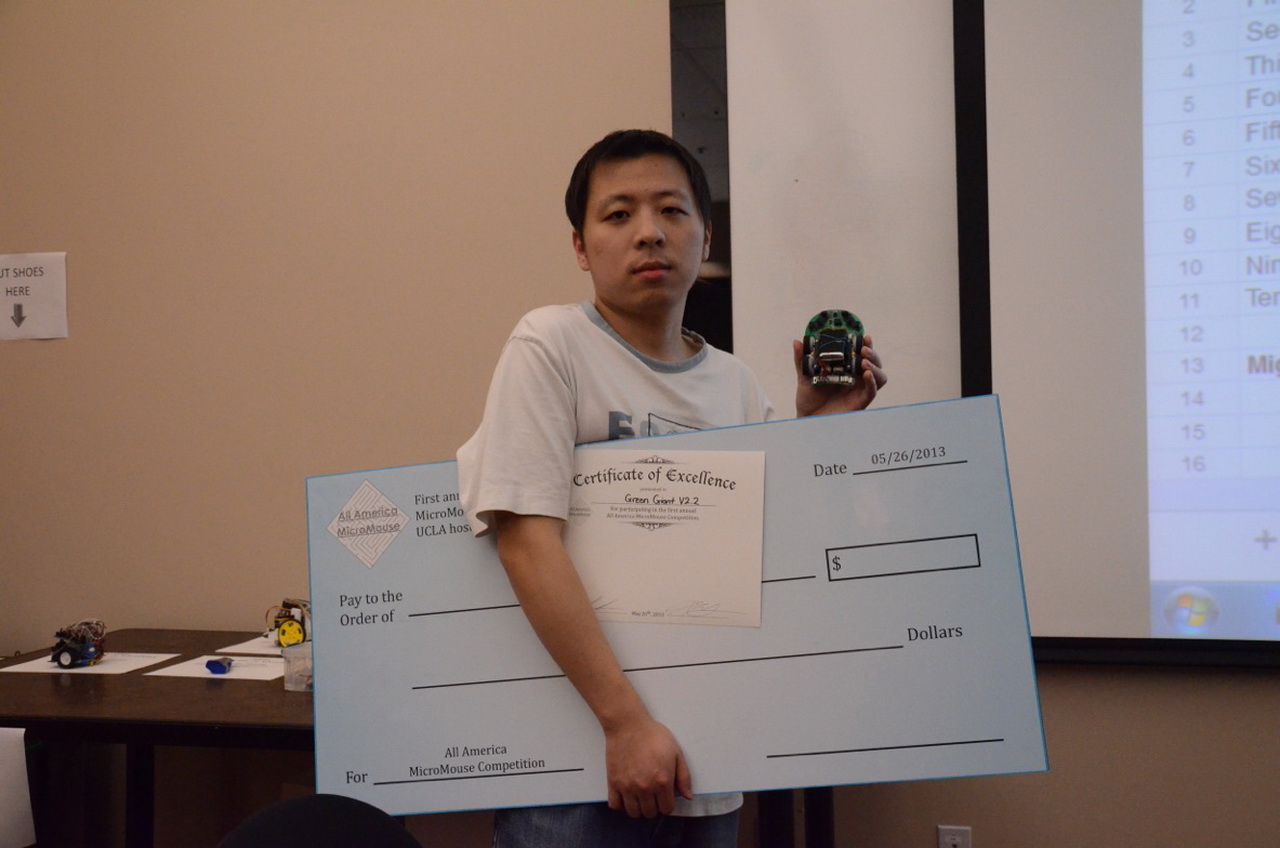 At the end, we had a group photo shot for all entries as the finishing of this memorable day.

The results are here: Link

Now it is the time for me to worrying about my new mouse and the coming competition next year!

As what I promised, I will release “Calibration Strategy Part 2” after this one. I deleted all footage for this one since I wasn’t satisfied with them. I will retake the video and make another video in order to help to explain the concept of the coming posts.