Same as Last year, I put all videos into one playlist, so the individual runs won’t spam all over this post.

This year I am able to use multiple 4K action Cameras placed at different angles to have a comprehensive view of this event. The camera 1 was made with a top view at 4K 30fps, camera 2 was placed at the side of the court in order to cover the organizers and the audiences as well. Camera 3 was attached right under the camera 1 to capture video at 240fps at 720p resolution. In addition, I got a copy of the video from the scoring system camera from David Otten, then made a video with all camera 1, camera 3 and the David’s camera into one screen, perfectly synchronized by their audio tracks, to enhance the video watching experience from my youtube subscribers.

Here is screen shot of how I merge 3 cameras into on screen. Since 2 of footage are 4K resolution, it did took me really long time to get everything render properly, not even mention many failures in between.  T.T(took me a week, I want my life back!)

For those who are curious, here is the diagram of how I set up my cameras: 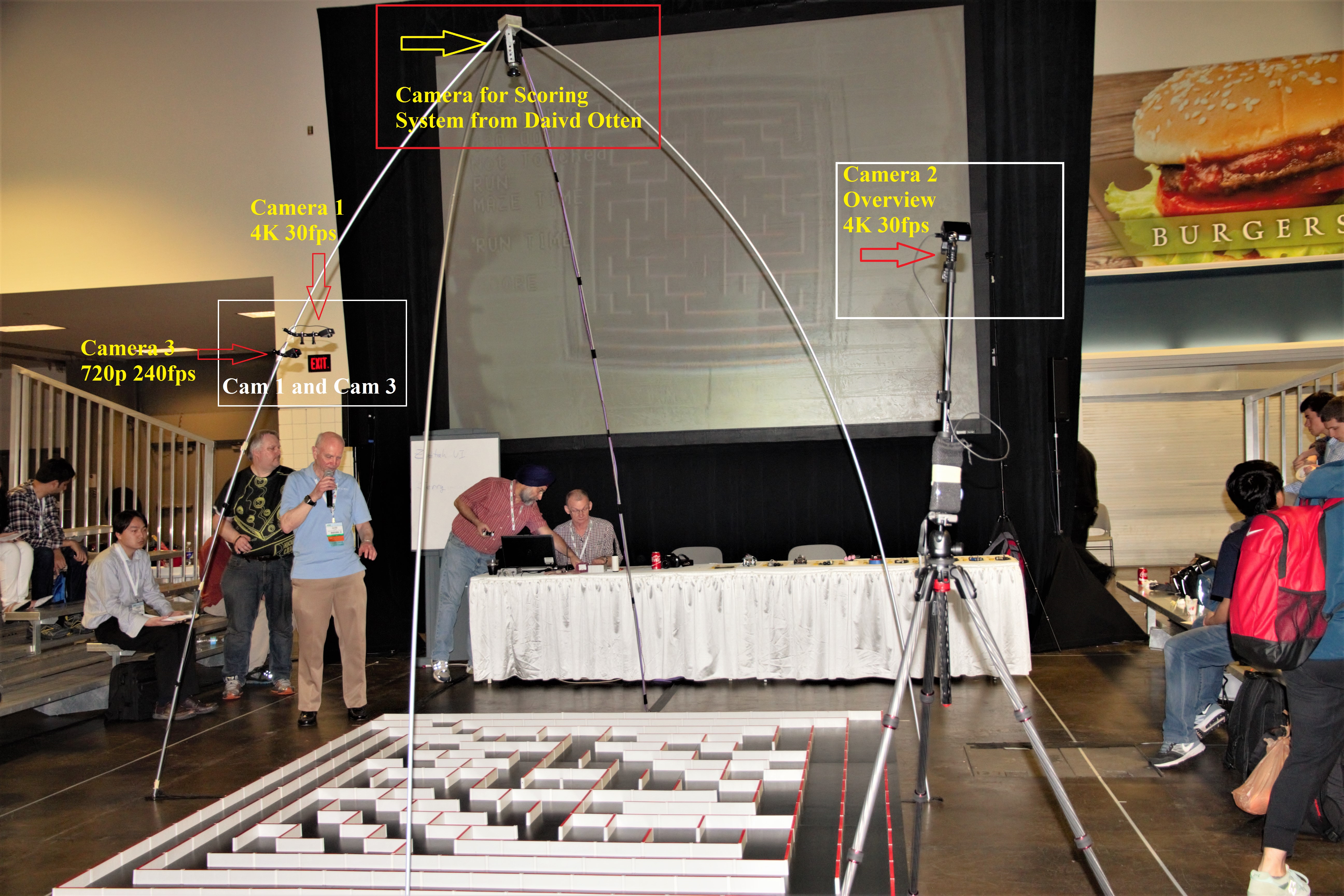 Since David will always have his scoring system camera setting up by this way every year, I will likely to use same method to secure some of my cameras to the support beam for the scoring camera in the future. All I have to do is to carry a tripod along with a selfie-stick and use it to lift another camera for overview. In this case, you will see very similar style of videos for my future APEC journeys.

Alright, here are the videos in the playlist, switch to 4K option and enjoy! These are the first ever videos recorded and edited in 4K resolution for any micromouse Events.

Disclaimer: If you are going to use my video footage on youtube for any purpose, please contact me for permission first.

Here is the one standalone video in combine with all entries:

The video above is also included in the same playlist mentioned above. since I placed it at the very bottom of that list, I post it here just in case you missed it.

In addition, here is a short video for the speed run for 1st and 2nd place with my 240fps footage.

Some Brief for my performance at APEC 2017

Same as last year, I was completely in a deficit of having time to program and test my new robot. I barely finished the turn parameter calibration at home before I headed to the airport. As expected, I didn’t have time to make my mouse to adapt to the APEC maze since I still have to something have it capable to run properly. I noticed my mouse turn more than what I did at home, since the distance of each cell is only 178.5 instead of 180(same situation in UCLA since they used the same all piece from same Korea manufacture), so it messed up the unit conversion between encoder and gyro. This is actually one cause of the crash of my speed runs during competition.

The second cause of the crash was that I didn’t have time to re-calibrate the post detecting threshold parameters. In this case, as long as the robot is a little far away from the post at diagonal movement, since the post reading at APEC is smaller than what I had at home, the post will be missed by the mouse and no further action can be made(so the robot kept going straight until hit the wall).

Although those are easy fix, and caught my attention during the practice, I didn’t have enough time to have it done, therefore my robot kept crashing at same spot over and over again when turning with vacuum fan.

On the other hand, the searching strategy I planned was very successful a head of time. With the addition center sensor that can read the distance 2 cells away, the robot was able to accelerate up to 1.8m/s when at a unknown straight path. The strategy gave my robot 9 second less maze time to against the winner, Diu-Gow. The additional 9 seconds search time advantage is a straight up 9s/30=0.3s advantage to him, not even mention the setting for my first speed run is a little bit faster than him. In other words, I was once again extremely close to first place but didn’t make it. After all, his robot was made 2 years ago so he can focus on software development. In this case, I am considering to slower down the pace of hardware upgrading and focus on software due to the lesson I learned this time, although I am still not satisfy with my current hardware.

As of the details of my new robot GreenGiant 5.19V, the information will be posted at Greenye.net very soon.